And so, finally 24 days later John and Albert go over the top of Du Toitskloof Pass and start the best part of the whole trip down the side of the mountain on the dirt road to Diemersfontein farm in Paarl to complete what really has been the ride of lifetime. 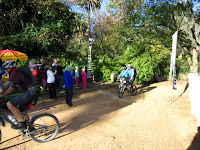 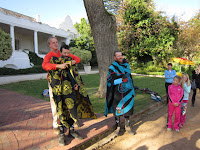 There at the end to meet us were our families and friends, and of course Dave Waddilove to present us with our blankets (the prize for completing the Race Across South Africa). 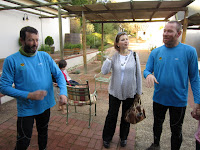 But the day wasn't without hardship. John started the morning with his first good wipeout of the race: It caused some panic because I did not want to drop out of the race at this late stage. I find I have been jitterier about unwanted mishaps at this late stage than earlier in the race because of the thought of throwing all the good work away. Fortunately, it proved nothing more than a few roasties, torn clothes and a stiff knee. Dave Waddilove had also saved some of the best for last, so before Du Toitskloof we were required to do a 5-6 hour portage with bikes on backs up Stettynskloof. Thereafter we wound our way to Du Toitskloof for a lovely smooth ride up the tar road before the final descent. 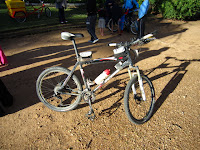 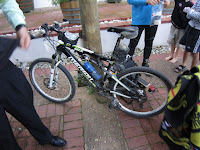 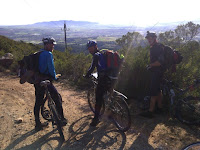 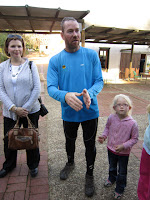 Will i do it again? Would absolutely love to were I to have the time, but family must come first for the next years. 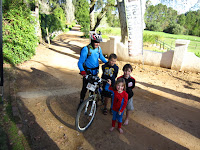 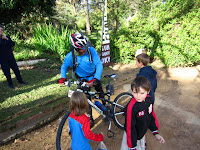 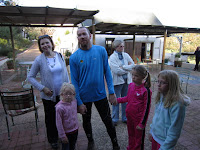 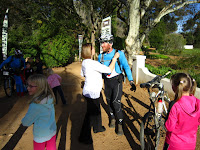 Do I recommend it to others? Absolutely. The race is like no other in South Africa. As much as I love Comrades, Ironman and all the other big ticket events that our great country offers, the Freedom Challenge could be called SA's friendly race. Everyone along the route was happy to assist with directions and the support stations provided by farmers or guest house owners were superb with their hospitality. But the spirit of the top competitors is also something unique. As they caught up with us, we would converse freely at support stations, they would offer tips to us rookies, and sometimes we even rode together for a few hours until we couldn't keep up anymore. And of course wherever we rode our bikes slept outside, unlocked and unguarded. One definitely finishes the race feeling very positive about humanity and South Africa in general. 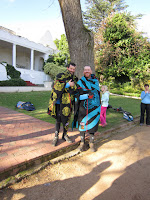 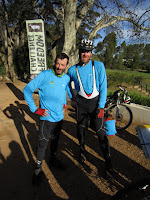 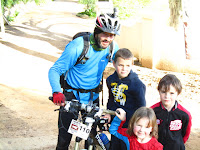 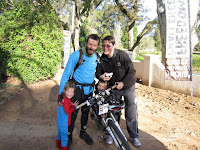 But on top of this, I would love to see more people doing the race because it really makes one understand oneself better. I for one am not a loner. I need company in undertaking such activities and had a great accomplice in Albert. I saw some others, who thought they could go it alone crash out because there was nobody to talk them through the mentally tough days. 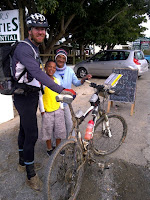 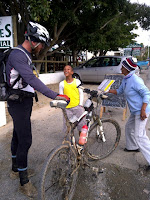 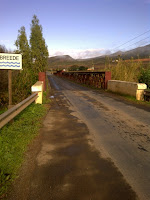 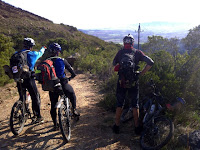 Then there was a great mental cycle worth observing. The 1st 6 days we road with the Ride-to-Rhodes riders and their fantastic support crew. This was physically the toughest phase of the race but mentally the easiest because of the company and moral support from the likes of Dave and Dawn, and riders Fiona, Dereck, Pavel and Andries. They taught us some basic bike maintenance which we sorely lacked, and warned us about a severe dip that would come in the mental cycle after Rhodes. That's exactly what happened. The Ride-to-Rhodes ends, the riders and support team go home, and life on tour becomes lonely for Albert and John. Simultaneously, there was little light at the end of the tunnel as Cape Town was still weeks away. It was important to grind through the week straight after Rhodes, and we were also fortunate to start meeting up with other riders which boosted the spirits. Then, gradually day by day, Cape Town looked nearer, and after exiting the Baviaans Kloof at Willowmore the spirits were high and only technical or injury could possibly stop us. It is important to understand these mental up and down cycles and to be able to work through them, because life works like that. The Freedom Challenge allows one the opportunity to experience this cycle and to practice working through it. But besides all of this, we just had a damn good ride. 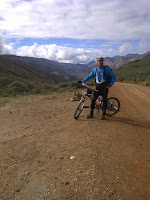 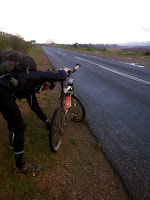 Today, the remaining riders complete the 2011 Race Across South Africa.
Posted by @EwaldKellerman at 00:00 No comments:

A tired John and Albert spend their last night in Trouthaven. More than three weeks into the race, they can't wait to finish off tomorrow. Cellphone reception is still an issue, but Retief Joubert, a fellow Freedom Challenger was kind enough to lend them his phone for a quick update. They are doing well, spirits are high and the remaining distance is much easier to comprehend than the last 2300km.

According to the rider progress table, it looks like 14 riders have already completed the race thus far, placing John and Albert around the middle of the playing field.

Please keep visiting the blog over the next week or two, as Albert and John have much more photos and stories to share about their travels. It is still not too late to subscribe via email on the right hand side of the page.

Tomorrow, being the last day, can by no means be underestimated as it is still quite a way away from the finish on Diemersfontein. Here is the last profile:

Albert and John from Team FNB initially planned to finish today, but the race was too tough, the weather too cold and the legs too weak after three weeks of constant cycling and carrying their bikes. They did not manage to get hold of me last night as cellphone reception is still a scarce commodity in these parts.

Back at the office, their colleagues of FNB Home Loans have arranged a Cyclothon for staff members to compete on spinning bikes, challenging each other on the number of kilometers they can complete in an hour and a half. To compete, every team has to donate a set amount to the Freedom Challenge Scholarship fund. FirstRand will double their contributions.

Posted by @EwaldKellerman at 23:42 No comments:

Message from the trail

"Over the past 2 days Team FNB has knuckled down to some hard work. After the 16 hour day from Willowmore to Prince Albert on Saturday, we skipped the support station in 'Die Hel' on Sunday, and the skipped Anysberg support station yesterday. The two double stages took 15 hours and 14 hours respectively. This means that we have passed the 2000 km mark, and are set to finish on Thursday if all goes well."


"Sunday's trip was arguably the toughest of the past 2 days. It involved climbing over the Swartbergpass, and then dropping down into 'Die Hel' for a quick lunch. Thereafter, the challenge was to find "die leer", an old donkey track that takes one up and out of 'Die Hel' at the other end of the valley. Fortunately, the brothers Louis and Anton Kirsten arrived in 'Die Hel' with us, or we' still be looking for 'Die Leer'. Anyhow, climbing die leer involved a good hour long portage up. Very steep slope with bike on back for an hour or so. After that, it was grinding it out to a late night arrival at Ronel and Gerhard's farm of Rouxpos."


"Yesterday was all riding. We spent most of the day on the sandy roads through Anysberg nature reserve. After a late lunch at Anysberg support station, we then slogged through to Montagu. The rain started to bucket down, but the spirits were high as we flew down Ouberg pass into the relative luxury of the Montagu country hotel at 21h00." 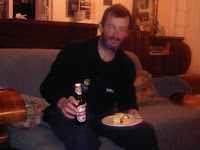 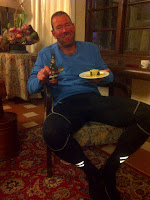 John and Albert, Team FNB celebrating the 2000km mark and less than 300km to go
"Today we head to McGregor and Kasra Support Station"

Albert and John did not sleep in 'Die Hel' last night. They reached the bottom of the Gamkaskloof and climbed 'The Ladder' yesterday afternoon, doubling up on the pace. Despite some optimistic planning to finish the Karoo section earlier, this is the first day they managed to skip a Support Station to bring the 26 day target closer.

Today they traveled from Rouxpost over Anysberg where it recently rained enough to turn the road into a mud bath. Albert tells me they look like 'varkies' who just finished 'playing' in the mud. Their journey for today did not stop here as they pushed forward to Montagu, doubling up on the second day in a row.

"I never thought I would be so glad to see the small town of Montagu" John said after finishing a 16, 14 and 13 hour days in a row. "We've decided to take it slow for the next couple of days and plan to finish on Thursday". They have only reached the hotel after 9h00 and are heading downstairs for supper and a beer to celebrate crossing the 2000km mark today. "We will probably be drunk by the second round"

Catching up on profiles for the last couple of days below. Tomorrow they sleep over in Kasra and Wednesday at Trouhaven before reaching Diemersfontein

Posted by @EwaldKellerman at 13:29 No comments:

The FNB Team is out of cellphone reception area again as they stop over in "Die Hel". From here, it is a long climb ("The Ladder") up the other side of the mountain. John and Albert were advised to do this in daylight, as the path is quite steep and could be very dangerous in the dark. Hope they are enjoying a couple of degrees warmer weather tonight in the valley of the Gamkaskloof.

Bicycling Magazine caught up with the winner of this year's Freedom Challenge, Alexander Harris at the finish, and transcribed his interview in this article. Worth the read to see what you have to go through to complete this race. Worth the read.

With the Tour de France on it's second day already, it might be appropriate to repost a quick comparison from a Freedom Challenge site:


Enough said.
Posted by @EwaldKellerman at 12:58 No comments: 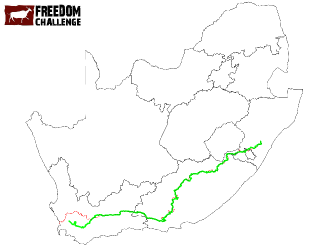